In the beginning of 2019 我和铭 went to Sicily to have a good visit of the main places.
Our plan was to rent a car and then drive a lot of km in order to visit the biggest number of the most relevant points of the island.

A short excursus on Corsica, i made this during the flight:

Our car was booked using Expedia at Green motion company in Palermo. When we landed they had no reservations from us. After a quick call to expedia service they agreed to make me rent another car of the same level, covering all the costs. I chose Europcar, who proposed me an automatic Smart Fortwo cabrio (A453). ~260€ renting it in the same day, against 35€ of the on-line offer.

1.1.19: the first day has been soft. The temperature was quite good and the sun was setting early.

First step was in S.Vito lo Capo, one of the most renowned touristic city in Sicily. NO people when we came, it seemed to be in a western film. 铭 tried her first drive in Europe and finally we went to visit Taranto, a port city, crowded also in the winter and also windy. Vintage restaurant opened just for us 15′ before the normal opening time and then we went to our B&B near Marsala, A Casa di Coso. Clean, cheap and with an epic breakfast.

1.2.19: the morning was quite cloudy and windy, as well as cold. Perfect for going to a mountain! first stop has been the Spanish quarter in Erice. No people and a lot of fog, but in any case satisfactory. That day has been covered by long distance travels: the stair of the turks was more than 2h from Erice, but the weather was getting better at every km. Stair of the Turks is a large, white limestone staircase that has formed naturally over the centuries. After a quick panino, at 15′ there’s the Temple Valley (The term “valley” is a misnomer, the site being located on a ridge outside the town of Agrigento). One of the most outstanding examples of Greater Greece art and architecture, its main attraction is the temple of Concordia, in doric style as well all the others. In the middle of the visit i noticed to be late for the check-in at our hotel in Syacusa (more than 2.5h) so we cut the visit and skid to Maison Ortigia first, and to a semi-desert place, the fairly good Trattoria Kalliope. We encountered a lot of road works, symbol of a region that is modernizing.

1.3.19: It’s always a good day when you beat the sun! That day started with a beautiful run in Ortigia island. Sunny and windy, quite cold. The sunshine was radiating of bodies, 6km with 铭， 8 km alone, good pace and mood.

After getting in the car (and tooking a 30€ bill, outside resident of Ortigia cannot park inside!) we visited Noto, a baroque city entirely rebuilt after a disastrous earthquake in the middle of XVII cent. Marzamemi was on the map, but the dubious road signs made for us impossible to go to the city center. Nearby there was the southest point of Sicily, with its unique mixture of wind, sun and edge feeling. Malta was only 100km, Tripoli 430. When you run you spend almost 2-3h in this activity and, if the daylight lasts only 10:37, you discover that the days are quite short (but interesting): so next destination was dinner, in Taormina, at Malvasia restaurant. The dishes were quite salty, but the owner offered us the cake. B&B Sottocoperta was out choice for the night: modern, desert and with a good breakfast (with a beautiful view of sunrise)

1.4.19: misfortunes never come alone, in this case snow (very rare in Sicily) and some health problems for 铭. Etna mountain was planned for the morning, but it was possible to proceed only for a short road after Zafferana Etnea, a little city on the slopes of Etna, we stopped at about 1000m of altitude. During visit of greek theatre of Taormina i realized that it was better to go: snow and health problems come together and it was impossible to go on.
Chinese restaurant are famous for soups (汤 in chinese) and good for health. In Messina we found a perfect and cheap restaurant, the Shanghai 2 of Messina, a very crowded city. Solaris B&B in Milazzo was the final destination of the day, in which i had a good and windy run in front of Aeolian Islands (isolated from bad weather) and i also paid the bill of 2 days before (disaster!). Deco’ supermarket and Hotel Milazzo for some buying int he afternoon and the dinner. Maybe the best restaurant of this trip for me: dishes and desserts were all great.

1.5.19: the day started early, and i went, alone, to visit the Capo Milazzo lighthouse and the Pool of Venus, at the top of Milazzo peninsula. I tested the blizzard in Sicily but it was worth it. The next stop has been Cafalu’, with it cathedral and the famous, Byzantine style, Christ Pantocrator (typical as fresco of the apse or in mosaic). The old town is tiny and clean, we ate typical Sicilian arancino in a shop in front of the cathedral. The weather was improving so it seemed a good idea to try to climb towards Gibilmanna in order to take some beautiful pictures. No way. With 3 fingers of snow some cars were just mounting the snow chains. Palermo, and the take off were near so we went to visit the Palermo cathedral (Gothic, Baroque style). Palermo is a funny city: after driving 20′ in a sort of decay, you find yourself in front of a beautiful city centre. Monte Pellegrino is the mountain that dominates Palermo. The top was windy and sunny, the photos were great! during the descent a road was blocked, the one descending from the airport side of the mountain. After turning the car, and a fast drive, the airplane was in delay of 1h. No problem in returning the car to Europcar. Ryanair is quite messy and commercial airline company (they sell Scratch and win suring the flight…) but it’s the cheapest. A lot of compromises in this life… 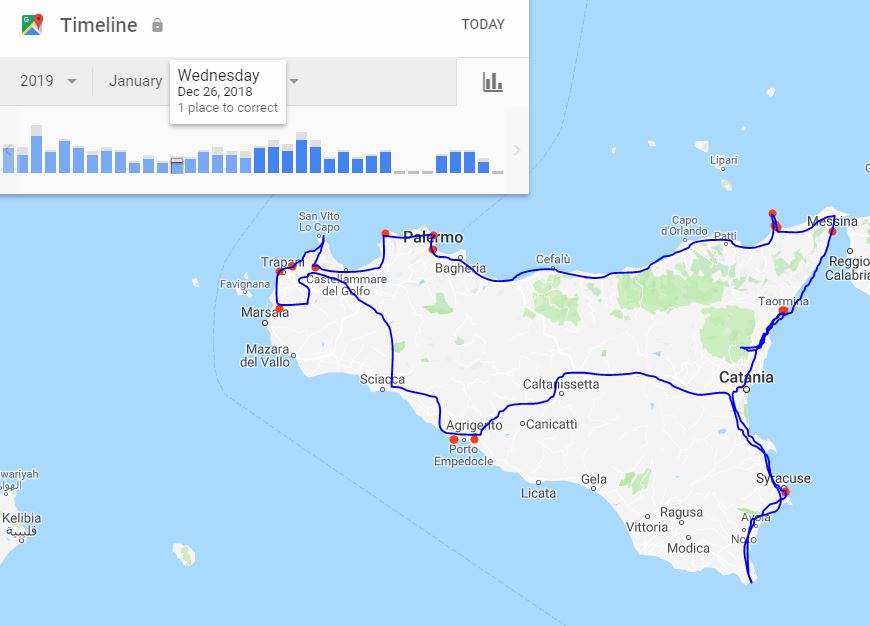